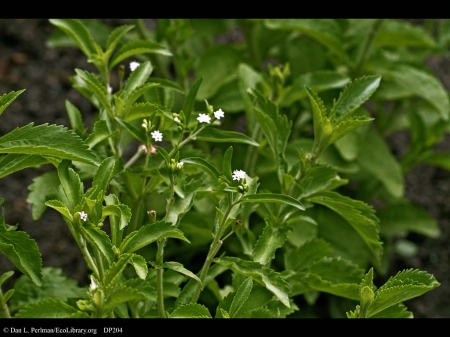 Remarkable herbal sugar substitute! Contains stevioside, hundreds of times sweeter than sugar but without the calories. Leaf powder can be used in place of sugar in drinks, baked goods, desserts, preserves, etc. Has a pleasant flavour of its own that never dominates or overwhelms what it is added to.

Once all your leaves have been harvested you will need to dry them. This can be accomplished on a screen or net. (For a larger application, an alfalfa or grain drier can be used, but about the only way an average gardener might gain access to such a device is to borrow it from a friendly neighborhood farmer). The drying process is not one that requires excessive heat; more important is good air circulation. On a moderately warm fall day, your stevia crop can be quick dried in the full sun in about 12 hours. (Drying times longer than that will lower the stevioside content of the final product.) A home dehydrator can also be used, although sun drying is the preferred method. Crushing the dried leaves is the final step in releasing stevia’s sweetening power. This can be done either by hand or, for greater effect, in a coffee grinder or in a special blender for herbs. You can also make your own liquid stevia extract by adding a cup of warm water to 1/4 cup of fresh, finely-crushed stevia leaves. This mixture should set for 24 hours and then be refrigerated.

Growing Tips: Stevia plants do best in a rich, loamy soil ? the same kind in which common garden-variety plants thrive. Since the feeder roots tend to be quite near the surface, it is a good idea to add compost for extra nutrients if the soil in your area is sandy. Besides being sensitive to cold during their developmental stage, the roots can also be adversely affected by excessive levels of moisture. So take care not to overwater them and to make sure the soil in which they are planted drains easily and isn"t soggy or subject to flooding or puddling. Frequent light watering is recommended during the summer months. Adding a layer of compost or your favorite mulch around each stevia plant will help keep the shallow feeder roots from drying out. Stevia plants respond well to fertilizers with a lower nitrogen content than the fertilizer"s phosphoric acid or potash content. Most organic fertilizers would work well, since they release nitrogen slowly. Harvesting should be done as late as possible, since cool autumn temperatures and shorter days tend to intensify the sweetness of the plants as they evolve into a reproductive state. While exposure to frost is still to be avoided, covering the plants during an early frost can give you the benefit of another few weeks" growth and more sweetness. When the time does come to harvest your stevia, the easiest technique is to cut the branches off with pruning shears before stripping the leaves. As an extra bonus, you might also want to clip off the very tips of the stems and add them to your harvest, as they are apt to contain as much stevioside as do the leaves. If you live in a relatively frost-free climate, your plants may well be able to survive the winter outside, provided you do not cut the branches too short (leaving about 4 inches of stem at the base during pruning). In that case, your most successful harvest will probably come in the second year. Three-year-old plants will not be as productive and, ideally, should be replaced with new cuttings. In harsher climates, however, it might be a good idea to take cuttings that will form the basis for the next year"s crop. Cuttings need to be rooted before planting, using either commercial rooting hormones or a natural base made from willow tree tips, pulverized onto a slurry in your blender. After dipping the cuttings in such a preparation, they should be planted in a rooting medium for two to three weeks, giving the new root system a chance to form. They should then be potted ? preferably in 4.5-inch pots ? and placed in the sunniest and least drafty part of your home until the following spring.
​​