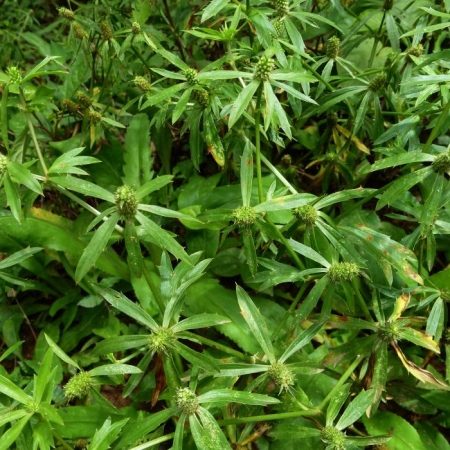 Eryngium foetidum is a tropical perennial and annual herb in the family Apiaceae. It is native to Mexico and South America but is cultivated worldwide. It is relatively unknown in the United States, and is often mistaken for its relative Cilantro. It is also known by many other names, such as Fitweed, Puerto Rican coriander, saw leaf herb, Mexican coriander, Shado beni (Trinidad),

Culantro is an herb with a pungent odor; the leaves have toothed margins and they grow in a basal rosette pattern. It grows best under moist, shaded conditions near cultivated areas.

Culantro is rich in iron, carotene, riboflavin and calcium; it is better suited to being frozen than the more delicate leaves of cilantro. This plant is widely used as food flavoring and seasoning herb for dishes and chutney in the Caribbean; it is popular in Asia for food use. Puerto Rico uses it extensively in stews, soups, and beans.

Cilantro is often added to spicy Latin or Thai dishes for the citrus notes that help complement these foods. Culantro is added to heavy foods such as meats, sauces and chutneys. It is almost always used cooked, while cilantro is often used fresh or added at the end of the cooking process to retain its delicate flavor. The leaves of each plant can be used interchangeably, but culantro has a more pungent aroma and flavor. Culantro is the basis of sofrito, a blend of herbs and seasonings that forms one of the most important flavors of Puerto Rican cuisine. Culantro is an ingredient in stomach medicines and is used to treat flu, pneumonia and malaria, among other ailments.

Growing Tips: Soil:Plant Mexican coriander in mildly acidic, neutral, or mildly alkaline soil, which is well-drained but kept constantly moist. The amount of moisture present is more important than the soil type when growing this herb. Light:Plant this herb in the shade. Mexican coriander will grow in full sun, but it is not the optimal condition. Plants grown in shady areas have larger, greener leaves and a more pungent aroma. Plant Mexican coriander in the shade, particularly if you plan on selling it, because it will be much more attractive. Timing:Plant Mexican coriander after the last frost, in early spring. The plants need some cool weather, but they can"t survive a frost. Plant them in rows, leaving about 6 inches between each plant. Allow another 6 inches between each row so that the plants don"t crowd each other. Mulching will help keep the roots shaded and cool. Harvest:Mexican coriander plants produce small blue flowers as they mature. However, the leaves are the desired part of this plant, and when flowers begin growing, the leaves become tough and unsuitable for culinary uses. Therefore, you should harvest this plant before flowers begin forming (at about 8 to 10 weeks). Harvest Mexican coriander by removing the entire plant at soil level, which will encourage it to re-grow and allows for optimal production. To gather fresh leaves for use in the kitchen, cut the large outer leaves individually. However, if you plan to process and preserve culantro, use a knife to harvest the entire rosette at soil level.You can preserve the wonderful flavor by putting the leaves of culantro in a food processor with enough olive oil to moisten it. Once it is chopped, put the mixture into a freezer container, label it, and place it in the freezer. If you have any doubt, put a layer of olive oil on top to prevent freezer burn. Whenever you need culantro, use a knife to chip a bit of the chopped culantro out of its container.
​​