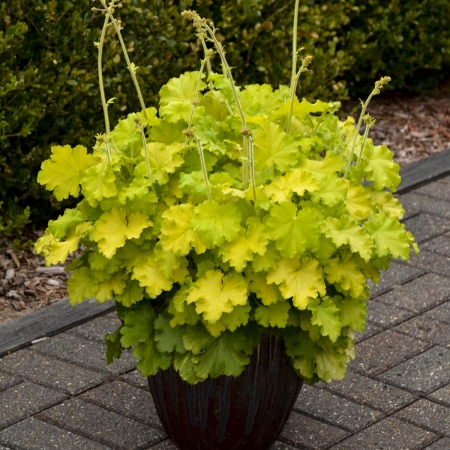 Have you struggled with chartreuse-leaf Heuchera burning in the past? If so, you'll love this new yellow Heuchera. Its best color is in part or filtered shade, where we've been pleased to observe almost no burning, a problem that plagues other varieties. Slightly ruffled, chartreuse leaves are produced on an especially vigorous habit, thanks to its Heuchera villosa heritage. The color will be more lime green in deeper shade. Over time, 'Lemon Love' will gradually spread to about 3 feet wide if given the space. Cream flowers with hints of blush in the calyxes are produced above the foliage in early summer. A great color for brightening up your shade! This plant is a Heuchera villosa hybrid. The villosa species is a large, late blooming type that exhibits an increased tolerance of high heat and humidity over other species. Most produce cream flowers in midsummer, though they are grown more for their fantastic foliage. H. villosa is native to the southeastern United States. Coral bells are easy to grow and blend easily with most other perennials in the landscape. Because of their low, mounding habit, they are often used as edging along paths or in containers. Try cutting a few of the tall flower scapes for fresh bouquets.
​​

Growing Tips: Heucheras are easy perennials to grow and fit nicely in the front of any border, rock garden, or container. They grow most vigorously and have the stongest colors when grown in partial shade (preferably afternoon shade). They can also be grown in full shade but their growth rate will be very slow. Some varieties can withstand full sun in northern climates if they have consistant moisture, but their colors tend to fade with the intensity of the sun. The soil should be amended with organic matter prior to planting. It should also have good drainage and a neutral pH. Heucheras are evergreen in areas with mild winters. If properly sited out of the way of winter winds and with reliable snow cover, gardeners in northern regions may also find their heucheras acting as evergreens. If the plant looks tattered by early spring, shear off any damaged leaves to make room for the vibrant new foliage which will fill in quickly. Heucheras can be grown under Black Walnut trees because they are resistant to the toxin Juglone which the trees emit from their roots. Heucheras are also salt tolerant. They are useful in the north along pathways which are salted in winter or for people gardening in coastal regions. Occasionally in northern regions, heucheras have a tendancy to heave out of the ground because of the freeze/thaw cycle. To combat heaving, add an extra layer of compost around the plant's roots in the fall. In the spring, if the plants have heaved at all, the new roots will grow into the fresh new layer of compost.
​​